The Indeed job site has announced that the leading technology organizations to work in India are based on ratings and comments. Leading the pack is Adobe Inc., followed by industry giants NVIDIA and Microsoft, according to an Indeeed press release. The Indian Space Research Organization (ISRO) was the top ranked Indian organization at number 10 and the only public sector company on the list.

The top five work places on the list are multinational corporations (MNCs). US giants Adobe, NVIDIA, Microsoft, SAP and Akamai Technologies are among the top five on the list. An unanticipated candidate on the list is the Indian Space Research Organization (ISRO), in tenth place, one of the few Indian workplaces on the list, and the only participant in the public sector. “Indian job seekers, as has been noted in the past, continue to have a preference for stability and job security in the public sector … 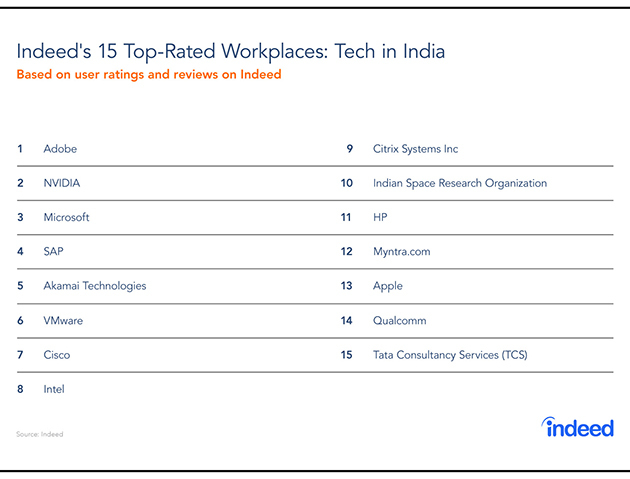 “In addition to strategic and meaningful programs for the workplace, companies that have focused on people management and have contributed to creating an enabling environment for their employees have been highly valued by job seekers,” said the MD Sashi Kumar from India.

“In addition to competitive compensation, companies that work to make their employees feel like they work with, and not for the company, create a culture of ownership and instill a sense of loyalty in their employees,” he added.

“We are delighted to appear on the list of best-qualified workplaces in 2018 in India: The best in technology.” In the press release, Rajneesh Kumar, head of corporate affairs at the Flipkart Group, said that at Myntra we are committed to making the most of the technology to interrupt the way fashion is accessed and consumed.

What is the difference between B.E. and B.Tech?